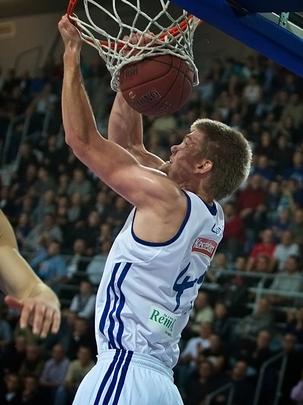 Nick Lewis is the founder and head coach of PlayBIG Hoops.  He grew up in Phoenix, Az where he first started playing basketball around age 8. While growing up he would often drag his mom out to their backyard court so she could rebound for him.  Nick's mom Melodie is who first used the term "PlayBIG" as she would tell Nick before every game "You gotta PlayBIG!"  It became Nick's mantra and it is in her honor that PlayBIG Hoops was developed.

Nick attended Brophy College Prep High School in Phoenix.  While at Brophy Nick helped the Broncos to a 5A basketball state runner-up and a 5A volleyball state championship his senior year in 2001.  Nick was awarded a full scholarship to play at the University of San Diego where he played 4 years and earned WCC all conference team and all district 14 honors his senior year.  After college Nick played 2 years in the NBA/Dleague and then finished his career playing 5 years professionally in some of Europe's top countries (France, Spain, Greece, Poland, and Belgium).